City Guide: Things to Do in Barcelona

Think Spain and Barcelona comes to mind instantly. As a kid, the only Spanish city I’d heard of was Barcelona and I really wanted to visit it.

Cut to my honeymoon and there I was, standing in this amazing mega-city, living out my childhood fantasy with the one I love. When we first reached Barcelona, we were so fascinated with all the hustle-bustle around us.

People walking, people talking, and also helping out tourists like us. The local folk were welcoming and assisted us on numerous occasions when we were lost. We were so ready for spending the next 4 days in the stunning city, which seemed too friendly for the travelers.

I think that’s a major reason for me falling in love with the city almost instantly – when the people are nice, every experience is better. And it’s here that you see the uniqueness of this culture; it’s a progressive society which is still old-school in its hospitality.  What’s not to love about that? And trust me, that’s not the only thing that pleases you about the city – there are many things to do in Barcelona!

Read this in case you are planning a combined Spain and Portugal trip. My first reaction to Barcelona, right after we checked out of the airport was – ‘it is different’, ‘so different’. As we made our way towards the Las Ramblas Street, where our hotel was, we saw hundreds and thousands of housing societies, where each flat had a BARCA Flag hanging outside prettily. It gives an idea about the passion and love of locals for the game of football.

When we finally reached Las Ramblas, we couldn’t believe our eyes. As we were traveling from Ibiza to Barcelona, it was a 360 degree change for us. From pristine, magical yet so quiet beaches to seeing thousands of tourists meandering the ever-crowded lanes of Las Ramblas, it all was so overwhelming. Trust me, not so heartening or even eye pleasing. It took me some time to realize that we indeed had landed in a bustling city which was world’s apart from Ibiza.

I loved how tourists and locals of all age groups were taking selfies on the Las Ramblas street, thus making it prominent how popular that particular area was. I still remember the voices of those busy lanes with cars moving on both the sides; passing through the chatting tourists; standing beside the enthusiastic youngsters; and drowning down the shrieks of the hawkers.

You can see children running across the cobblestones and numerous painted street artists impersonating statues. Though all this is a usual affair at the Las Ramblas street, but it fades away as one makes way towards the hidden backyards and other Barcelona corners.

It’s been 1 year that I have visited the bustling city of Barcelona but the pulsating life and its blooming feel is still so fresh in my mind. I can recount each and every experience clearly. The images of the ever busy streets are so deeply ingrained in my brain, honestly. There are so many things to do in Barcelona that each traveler can find a sweet little corner as per their taste and feel at an ease.

A Walk to Remember at Las Ramblas

Though we were greatly cautioned about strolling carefully on the busy Las Ramblas street by many, we still chose to get accommodation on the same street as it was the major landmark of Barcelona, with which most of the tourists identify. The lively promenade is a 1.2kms stretch linking Plaça de Catalunya with the Christopher Columbus Monument at Port Vell. This street in the Central Barcelona is so damn action-packed that you’ll feel like the entire city has come for celebrations at a one particular place.

This area is primarily pedestrianized with the pedestrians ruling the streets and the narrow one-way traffic roads seem to be always jam-packed. I was absolutely enchanted on witnessing numerous street performers modeled as human statues on the street, and of course, I couldn’t refrain myself from clicking a picture or two with them. Definitely, all the street performers are quite cool and they are more than happy to shake a hand or have a moment of fun with you!

Along the full length of Las Ramblas, you can find hundreds and thousands of shops to buy apparel, shoes, accessories, veggies, and fruits. And I could make out from the overwhelmingly high prices of everything in this area that it was due to high tourist influx. Okay, and the service wasn’t great either, I must tell you. As we were already staying in a hotel which was providing us 24×7 buffet services, we were quite reluctant to go out and dine in at the restaurants along the Las Ramblas streets (of-course, because of the elevated prices).

Still, we did enjoy sitting in the outdoor restaurants with a jar of sangria on a few occasions. Make sure you take a pitstop at the Boqueria or the traditional indoor market in Barcelona, famous for its tapas and fresh juices.

We also had a good time shopping and haggling along the Ramblas streets, and it was good meeting a few Indians who had their own stores over there. Just be smart and don’t get into their sweet talks, as it can drain a hole in your pocket. If you wish to buy anything from a camera battery to a phone charger or even clothes, you’ll get it all in El Corte Ingles. It is a big departmental store that has various floors intended specifically for shopping.

Personally, we didn’t encounter any pick-pocketing experience but still with the exorbitant amount of tourists roaming around freely, it is perhaps smartness to be careful all the times. 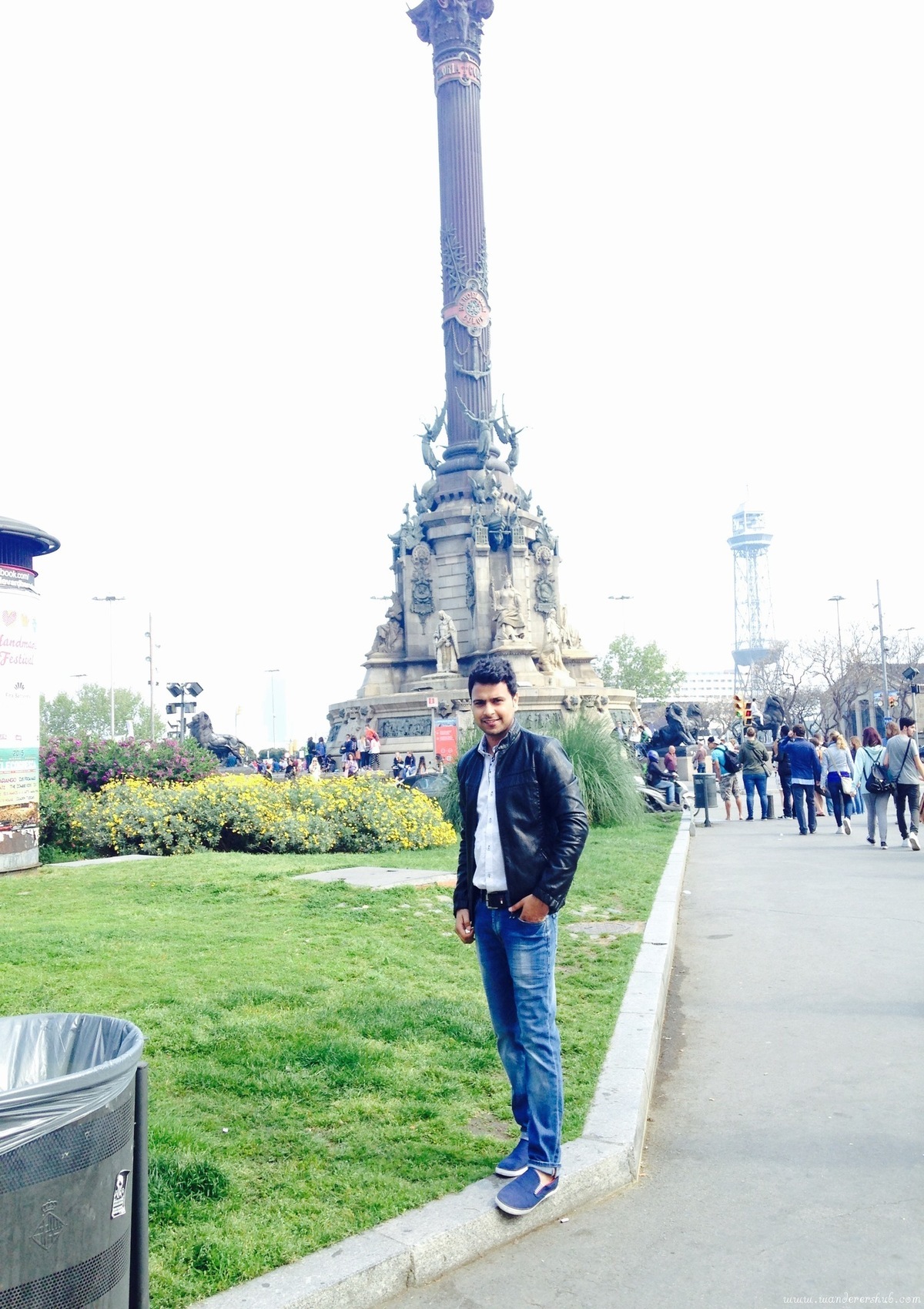 Columbus Monument at the end of Las Ramblas With the amazing street performers at Las Ramblas

I am definitely not the biggest fan of football and neither is Harsh. But my brothers are. And they told me straightaway that if I’d miss a game of football after visiting Barcelona then I’d miss one of the greatest things in life. This was enough a motivation to visit the popular Camp Nou. We got tickets for the match from a local vendor at the Las Ramblas Street. It was pretty easy and we didn’t have to go too far from our hotel looking for the tickets. Alternatively, you may book your seats online as well.

We were provided a map to travel via metro and it was nevertheless easy to travel around by the same. It was Barcelona vs. Valencia. We made our way into the Camp Nou Football stadium and got settled fast as everything was well-managed. I was astounded at how amazingly big the stadium was, and though I am not a football follower, the sporty zest and fervor all around was so infectious. I couldn’t control myself from cheering for Messi. Oh yeah! Barcelona won, which made us happier. And it was also the occasion when Messi scored his 200th goal, which made everyone jump in joy off their seats.

Even if you are not able to watch a match, do visit Camp Nou and take a tour inside to get an idea of the whole vibe. Outside Camp Nou – when the entry hadn’t started Harsh having his moment at the stadium By the time the game begun, it was so full

A History Lesson at the La Sagrada Familia

Goes without saying, history was my most hated subject, after Maths. Still I would recommend this history outing to each and every traveler visiting Barcelona. Gaudi’s one of the most popular works, La Sagrada is a Roman Catholic Church with an awe-inspiring façade one can ever see.

It was designed by the architect Antoni Gaudi and is indeed one of the most visited landmarks in Barcelona. It’s been over 100 years and the cathedral is still under construction. The shy ceilings in pure white light, the iconic mud castle as well as the opulent ornaments were the highlight of the cathedral.

A guided tour of La Sagrada Familia will cost you about 24 €. And an audio tour will cost 22 €. A basic ticket for just sightseeing is priced at 15 €. An energetic Flamenco performance comprises of all the aspects one could expect – singing, dancing, and even guitar playing. We were recommended two places to see Flamenco performance. One was right on the Las Ramblas street and was expensive, the other one was a bit far, though considerably cheaper. We went for the Tablao Flamenco Cordobes, each ticket priced at 35.50€. Ours did not include a dinner.

The experience of attending a Flamenco show in Barcelona was an awesome one and definitely one of the highlights of our trip. We made sure we came for the show on time, and it was easy as it was near our hotel.

The spirited performers have a way to reach your heart with their powerful show. I and Harsh were quite delighted. Photography is prohibited during the show. If you are looking on spending a nice, relaxing night in Barcelona then a Flamenco performance needs to be on your list.

Flamenco Show- Photography was not permitted

About 4kms away from Placa de Catalunya is the impressive Park Güell of Barcelona. It is an architectural gem designed by the architect Antoni Gaudí. The perfect harmony of architecture as well as nature is etched in my memory forever.

I would strongly advise all tourists to wear shorts or jeans with sport shoes. You need to climb uphill to reach the park. And the chances of tripping while sloping down are pretty good ( comes from experience as I slipped while coming down).

The smiling dragon at the entrance, some funny exhibits, the iconic mosaic lizard sculpture, and palm-shaped pillars are the major highlights of Park Güell. Do include this one on your list. A must visit in Barcelona – Park Guell My feet hurt – OUCH! But always ready to pose!

When in Barcelona, one of the most preferred ways of exploring the entire city is through hop-on-hop-off bus. The joy of sitting in the open-top seats is unmatched. I was thankful that I got to sit on the top, though the bus was so full. And while we were coming back after the city tour, it got so chilly that all those who were dying to sit on the top were now interested in sitting in the enclosed area, including myself. Carry some light sweaters or pullovers to remain covered for such occasions. This is especially important if planning a trip to Barcelona in the month of April or even early May,

We preferred hop on hop off Barcelona for the two days we had for sightseeing. It is easy to get a 2-day bus pass to travel around. And the best part is that you can uncover most of the attractions on your own pace.

On one odd day, while I was in my own world, listening to the audio tours, I opened a soda bottle that popped open with so much pressure that it spoilt my dress. While a few co-travelers and I myself had a laugh over that, it definitely was an embarrassing moment that I cannot forget.

Theses buses primarily take three routes– Green, Red, and Blue, and cover 44 stops. So, according to your wishlist you can sit in the bus and enjoy the well-loved stops. The heart of Barcelona – Plaça Catalunya, Platja del Bogatell (major city beaches) and Park Guëll – has to be my favorite.

You might also want to visit Seville after exploring Barcelona. There are a lot of things to do in Seville and spending 2 or 3 days there would be highly recommended. Touring in hop on hop off Barcelona Barcelona Travel: Do’s and Don’t of traveling in the city 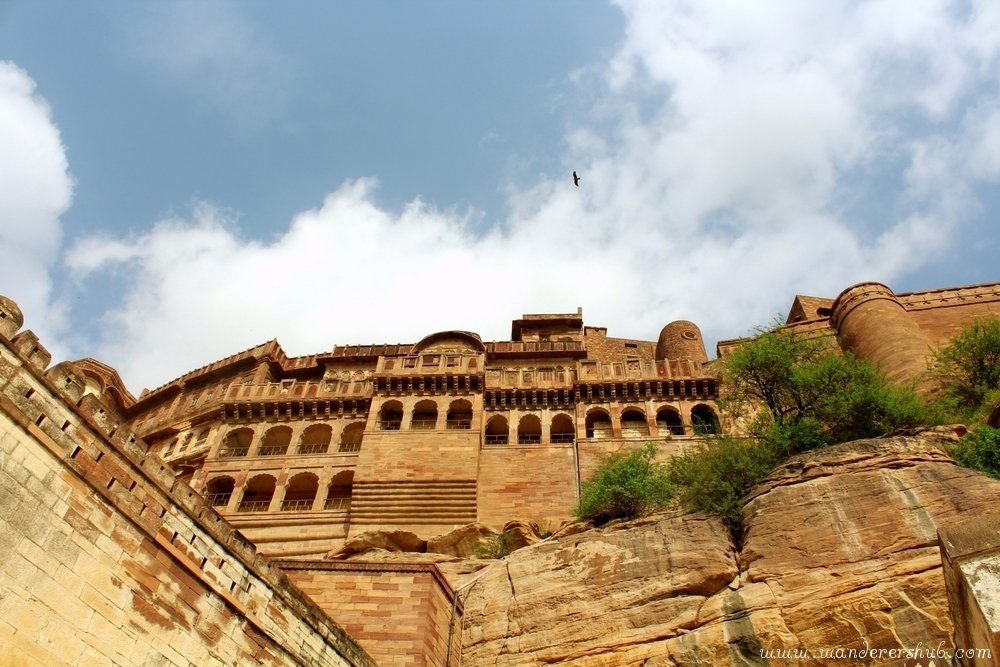